At 10/02/21, we were going to trade. Before we even traded I asked them if I had to go first just to make sure, since I saw in their post they said they wanted to go first because they got scammed before. They responded saying, “Yeah, sorry I just don’t feel safe considering the amount of times I’ve been scammed” which for me, It wasn’t a problem. If they wanted to go first it was understandable of why they wanted to, (based off their past situations of getting scammed). They gave me their Twitter information and I then tried to bound it to my account, but there seemed to be a problem with me even bounding their Twitter account to the idv account so I showed them and they said they think they solved the problem, so I tried again and it worked. I also showed them proof of how it worked. I asked them if they wanted me to unbind my Game Center, or see if they can first log in and once they did they can take it off (I said this because I wanted to make sure they got in the acc and if they weren’t able to get in I could log in, and the acc wouldn’t be lost & after I even logged in we could try to bind it with something else or another acc, since they did mention they had 3 other accounts besides the one they had bound to their idv acc). After I asked that question they responded saying, “you don’t need to unbind it” which I was like “oh ok”. I also let them know that I logged out the idv acc and their Twitter. I asked them to let me know if they got in the acc which they just responded with “HOLY **** YOU HAVE ONE OF THE BIG ROOMS” which I assumed they got in the account with no problems. After that, I asked them if they can unbind my Game Center they said “LET ME GO GET MY DEETS RQ” and “OKOK” they gave me like some information of something, which I have no idea what it was for. So I asked them what was that for and asked them if they can bind my Twitter and I also said I could send my username & password again. They never responded and I tried getting in contact with them several times. They still didn’t answer and it’s been a week, I still haven’t gotten any response. (Also I covered the information I mentioned I have no idea what it is for but either I wouldn’t want to give out their information) 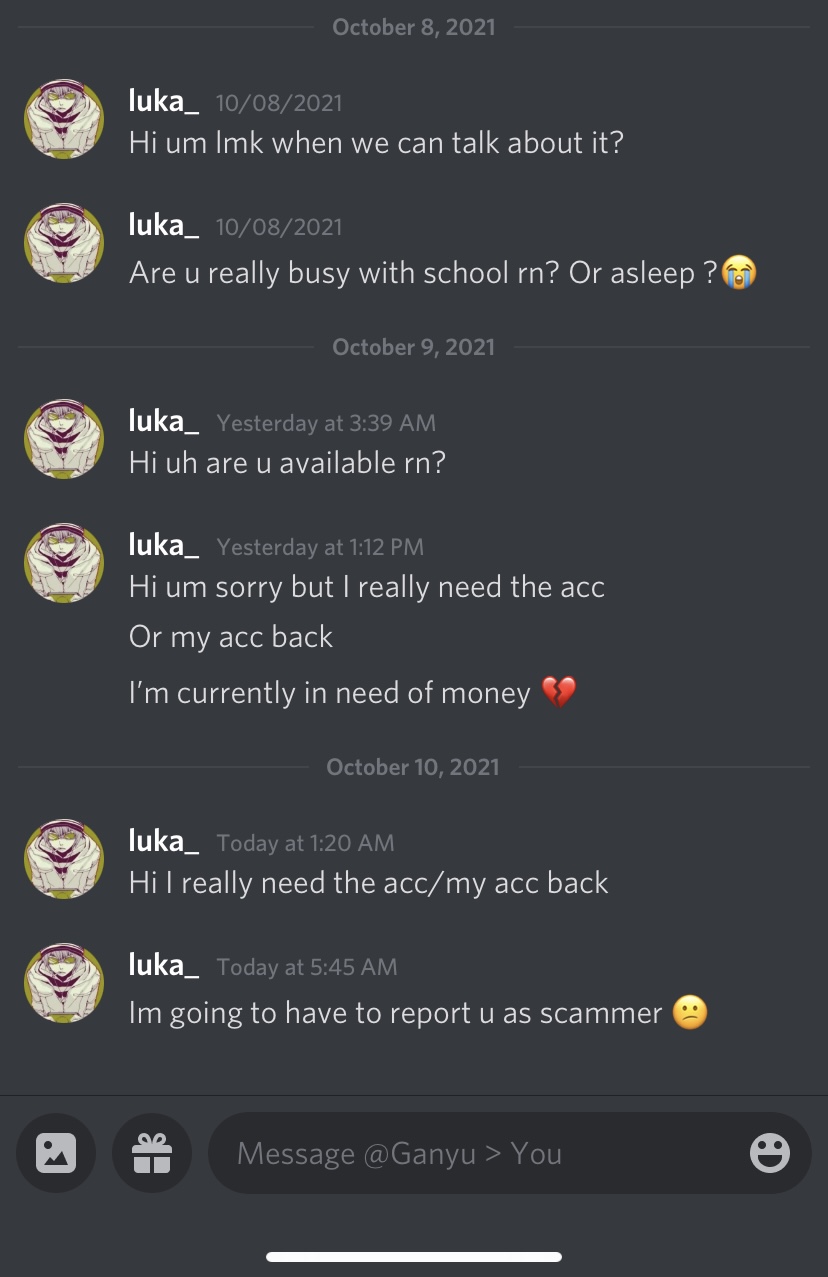 Please post an image of their discord ID with #

If you're interested in using me as the middleman for your transaction, please click on the image above

Middleman transactions conduct only on EpicNPC! Whoever contacts you off-site and claims that is me is a 100% scammer. I will never contact you on discord!​
L

@Albedoooo ban in 24 hrs if no response

B
JoeJoe23 is a scammer